Dolphins are any cetacean mammal species closely related to whales and porpoises. They are found worldwide, mostly in the shallower seas of the continental shelves and are carnivores, eating mostly fish and squid. Dolphin is very smart, we can see dolphin in aquarium.

In Tasty Blue, Dolphin is a character that players control to eat objects. However, in Mission Accomplished, players control Nanoshark to eat smaller object and grow bigger to eat Dolphin. 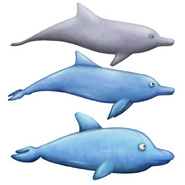 Different stages in Dolphin's appearance
Add a photo to this gallery

Retrieved from "https://tastyplanet.fandom.com/wiki/Dolphin?oldid=19390"
Community content is available under CC-BY-SA unless otherwise noted.